Learn About the Rich History of Serenata Farm

In 2003, when Bobby Robinson and Kent Smith discovered the rolling hills of the 55-acre tract that included the “old Mattie Fears place,” they knew that they had found their home. Rather than just expand the existing house, they decided to construct a new building adjacent to the old one.

The result was a manor house that embodies two distinct structures: a renovated mid-19th century farmhouse and a 21st-century European addition.

The exact date of the old farmhouse is difficult to determine. It may date as early as the 1840s, based on a faint “1842” etched on the exposed brick that local historian Woody Williams examined many decades ago.

An 1883 Morgan County deed book refers to the property as “the brick house farm,” indicating that it was already well-known and distinctive by the late 19th century. The heart of the original house is perhaps one of the oldest remaining brick structures in the region.

Starting in 1906, the 243-acre brick house farm was owned by the four Fears siblings, two brothers and two sisters, none of whom ever married. Until well after World War II, one of the brothers operated an old-fashioned general store in an outbuilding that the current owners have restored as a guest house.

The last of the four Fears was “Miss Mattie,” who, in her declining years, lived in the drafty brick house without electricity as if she were a pauper despite the fact that she owned a substantial portfolio of railroad stock. When she passed away in 1964 at the age of 90, the farm was sold and later divided.

Starting in the 1970s, a series of owners expanded and modernized the house but the narrow windows and thick brick walls of the two front rooms still reflect the original design. Modern updates include an upstairs with dormers, rooms across the back, a swimming pool, great room and sunroom, and a remodeled kitchen.

On the façade, they also modified the cornice, brick pilasters, and front porch to harmonize with the new building.

Work began on the big house in 2009, with attention to detail that included the use of old-style mortar technique, which imparted the patina of age to the new construction. The original overall estate was inspired by Tara, the columned Hollywood version, rather than the more modest plantation plain house of Margaret Mitchell’s novel.

In the final execution, however, the façade of Serenata Farm, with its front gable and 13 Ionic columns surrounding the foyer on three sides, evokes the look of an actual ancient Greek temple more than that of typical southern Greek-revival plantation house. The latter would usually have columns along the front only.

What Visitors Will See Today 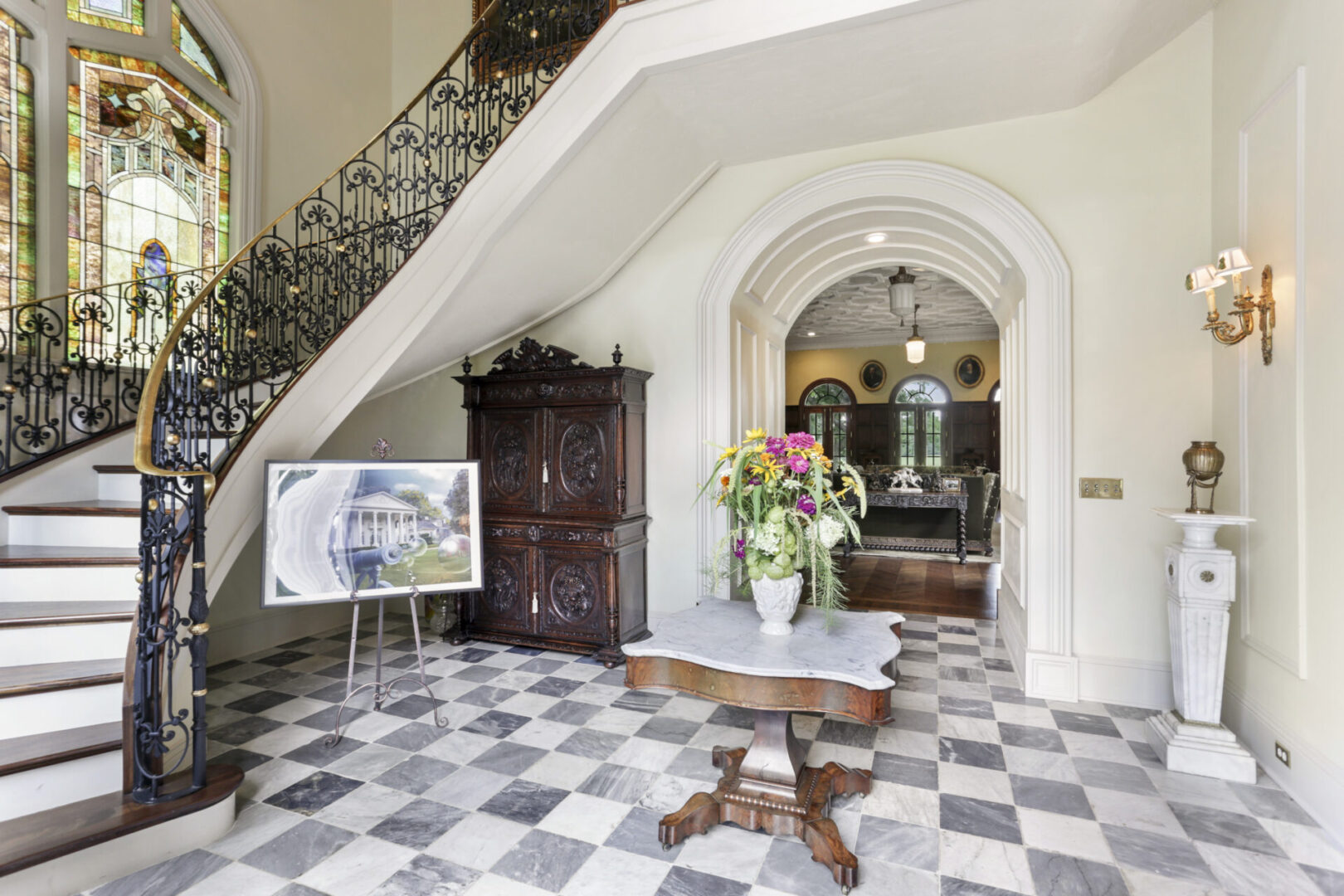 The Greek Revival porch surrounds an interior characteristic of a European country chateau. Guests entering the foyer through the antique French doors step on to Spanish marble tile and encounter a graceful, free-floating curved staircase with wrought iron balustrade. This particular corner is bathed in daylight from an ecclesiastical-style stained glass window or illuminated at night by a Murano glass chandelier.

In the grand hall, a huge 300-year-old fireplace brought from the Continent is placed so that it constitutes the focal point as one walks through the breezeway from the old house. Antique light fixtures from a European church hang from the high ceiling that is laced with intricate plaster ornamentation.

The oak floor is laid in chevron style, and the walls are clad with quarter-sawn oak paneling. A boar’s head painted on the mantle, a set of spreading antlers above the door, and an intricately carved black forest cuckoo clock combine to impart the room with the ambiance of a country gentleman’s hunting lodge.

Connecting the Past and the Present

The old and new flow together and blend as one thanks to an elegant breezeway that includes re-claimed Israeli stone underneath an arched, custom-painted mural with accents from leaded glass cabinets from Washington, Georgia. 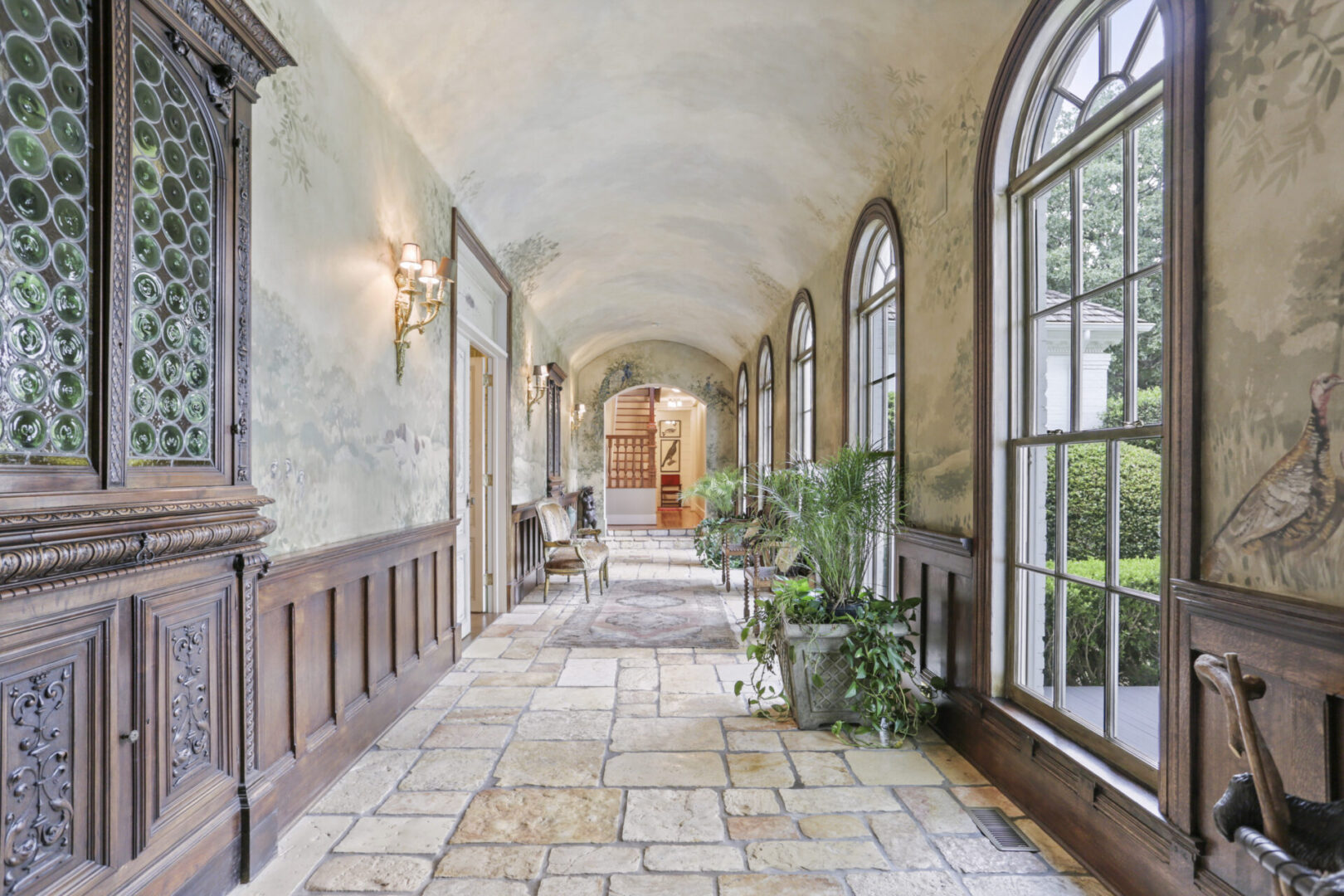 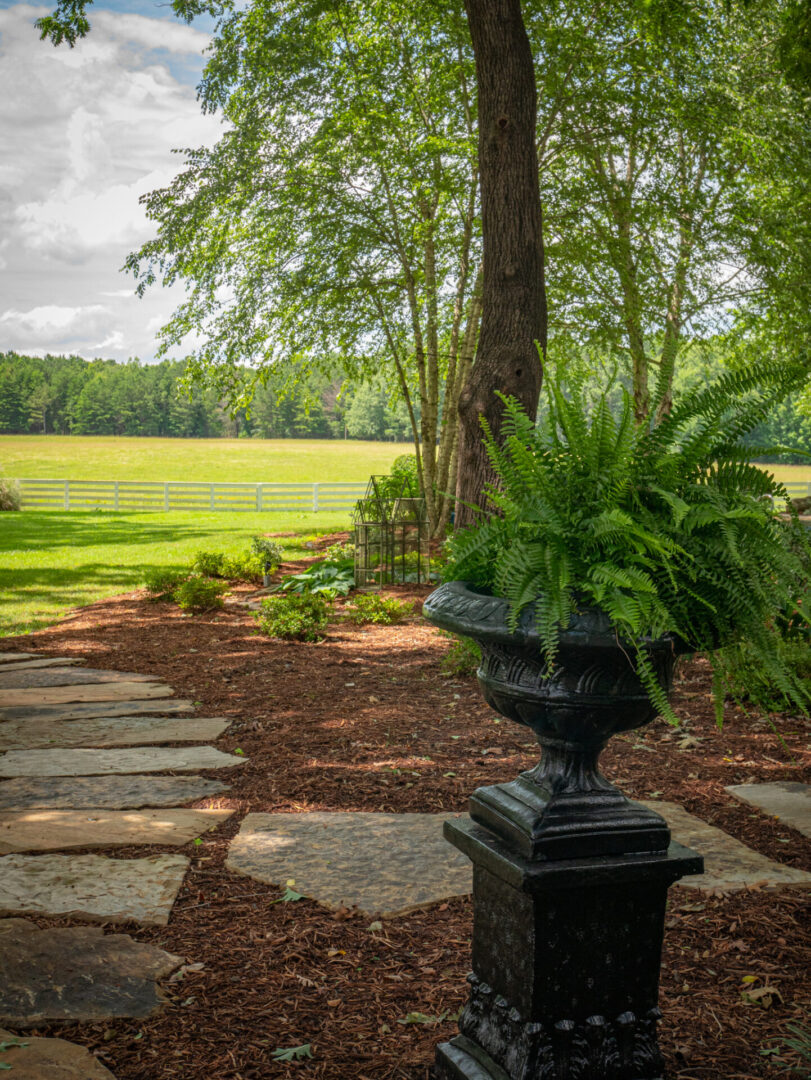 The immediate grounds of Serenata Farm feature intricate iron gates, a formal garden walkway, an inviting pool, a wisteria-covered pergola, restored barn, and a new silo along with a menagerie of rescue horses, donkeys, guinea fowl, llamas, longhorn cattle, and a somewhat rare solid white peacock. The house complex is surrounded by many acres of white-fenced pasture.

Local artist Mary Leslie Hartman was commissioned to add elegance and enhanced the main fireplace and painted European-style murals along the stone-floored breezeway.

On the dining room walls of the farmhouse, Karen Strelecki incorporated stories of the owners’ pets and livestock into her New England-style murals. All these plus beautiful bedrooms and a master bath inspired by the elegant restrooms of public buildings of a bygone era combine to give the house a special charm that manages simultaneously to be both very elegant and relaxing.

Get your wedding, event, and movie/photo shoot started tomorrow!
Contact us to book an appointment.